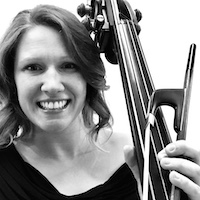 Jessica Grabbe is a freelance bassist living in Detroit, Michigan. She performs frequently with the Detroit Symphony Orchestra, the Grand Rapids Symphony and the Kansas City Symphony as well as the Detroit Chamber Winds and Strings and IRIS Chamber Orchestra. She looks forward to performing with Michigan Opera Theater in March and April of this year.

Jessica completed undergraduate studies at NEC in Boston with Donald Palma and masters at Rice with Tim Pitts. She has attended numerous festivals including Music Academy of the West, Tanglewood, Verbier and is currently principal bass of the AIMS Festival Orchestra in Graz, Austria.

Jessica has spent extensive time playing abroad, including a year of studies at the Royal Academy of Music in London, six months as a member of the Malmö Symphony Orchestra in Sweden and two and a half seasons as a member of the Royal Danish Opera in Copenhagen. She has also performed as guest principal with the Bergen Philharmonic.