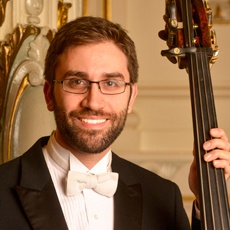 While attending Curtis, Campagna was a member of Symphony in C (formerly the Haddonfield Symphony) based in Camden, New Jersey. He was also a member of the Verbier Festival Orchestra in Verbier, Switzerland, from 2009 to 2011.

Campagna plays on a bass made by Giovanni Cavani in Modena, Italy, circa 1890.

Back to PSO Bass Section with Jeff Turner