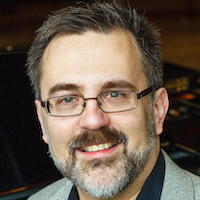 Mark Trawka joined Pittsburgh Opera as Director of Musical Studies for the prestigious Pittsburgh Opera Resident Artist Training Program in the 2003-04 season. In the 2006-07 season, he also took on the position of Chorus Master with the company.

Mr. Trawka coaches and performs with the Resident Artists and has also accompanied renowned mezzo-soprano Marianne Cornetti in her Pittsburgh recital appearances. He has been a member of the music staff at Houston Grand Opera, Dallas Opera and Portland Opera (Oregon), where he was principal pianist and assistant chorus master. Mr. Trawka served as coach/accompanist at Chautauqua Opera and at Glimmerglass Opera for many summer seasons. In the summer of 2006, he was director of the resident artist program at Berkshire Opera. Mark is on the coaching faculty at Songfest in Los Angeles where he has spent the past four summers. Mark made his conducting debut with the Resident Artists of Pittsburgh Opera in Ricky Ian Gordon’s 27.

Educated at the Eastman School of Music and the University of Southern California, Mr. Trawka began his operatic career in the Houston Opera Studio and in San Francisco Opera’s Merola Program.