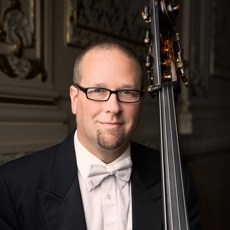 Peter Guild joined the double bass section of the Pittsburgh Symphony in 1999. Previously he had been a member of the Columbus and Toledo Symphonies. He grew up in Carver, Oregon, and took up the cello and bass in the North Clackamas School District string programs where he studied with bassist and string teacher Dave Anderson. Without the music programs in the public schools, it is unlikely that Mr. Guild would have ever played a musical instrument. He later studied with Mount Hood Community College’s Larry Zgonc. Mr. Guild earned his Bachelor’s and Master’s degrees in bass performance from the University of Michigan, where he studied with Stuart Sankey. Other teachers include Steve Molina and Jeff Turner.

Peter is the father of three kids, Marty, Sam, and Leah. He is married to PSO violinist Kristina Yoder. Mr. Guild enjoys cultivating carnivorous plants, some of which can be seen on display at the Mt. Lebanon Public Library.