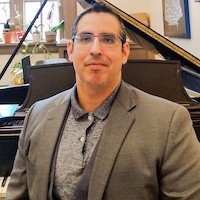 Venezuelan-born pianist Rodrigo Ojeda discovered his passion for music at the very early age of two when his parents made him listened to Carl Orff Trionfo di Afrodite and Carmina Burana, but it was not until the age of ten that Mr. Ojeda began to take his first piano lessons. By the age of fifteen, Mr. Ojeda was invited to perform Tchaikovsky First Piano Concerto, with the Gran Mariscal de Ayacucho Orchestra which was broadcast live on radio and television in Caracas, Venezuela.

A versatile pianist, Mr. Ojeda has frequently performed as a soloist, recitalist and chamber musician. He has performed in every prominent concert hall in his native Venezuela as well as in Ecuador, Spain, USA and Mexico with an expansive repertoire of Tchaikovsky, Brahms, Gershwin, Grieg, Schumann, Mozart, Liszt (Totentanz), Cesar Frank, Prokofiev, Rachmaninov, Saint Saëns and Stravinsky. Mr. Ojeda has participated in master classes with numerous concert pianists like Kasimierz Giesrod (former rector of the Frederic Chopin Academy in Warsaw), Marek Jablonsky, Georgy Sandor, Marta Gulyas, and Earl Wild.

Mr. Ojeda received a Bachelor’s Degree in Piano Performance at IUDEM, Venezuela (Institute of Musical Studies) in 1997 with his mentor and pianist Arnaldo Pizzolante,, then moved in 1999 to the United States where he received a Master’s Degree and an Artist Diploma at Carnegie Mellon University under Mr. Enrique Graf in 2003.

Currently Mr. Ojeda is an Assistant Teaching Professor of Coaching and Accompanying at Carnegie Mellon University as well as a piano faculty member in its Music Preparatory School. He has also been playing with the Pittsburgh Symphony Orchestra since August 2006.